This seminar invited the elite Tokyo Olympics coaches of two sides to join in the discussion, namely the gymnastics coach LIN Yu-Hsin (林育信) who talks about the legend “Roll over on Taiwan two heroic gymnastic athletes” on the gymnastic training and growth process of LEE Chih-Kai (李智凱), TANG Chia-Hung (唐嘉鴻). Boxing coach LIU Chung-Tai (劉宗泰) talks about “Grip a punching, waiting for the opportunity to fight back” on the boxing training process of boxer HUANG Hsiao-Wen (黃筱雯). Taekwondo coach LIU Tsu-Ien (劉祖蔭) speaks on “ Be ready to give one’s utmost for wining “ on the training process of his athletes. On the mainland, there are coaches of track and field Yuan Guo-Chiang (袁國強) who shares “the training exploration of Su Bian-Tian (蘇炳添)”, Badminton coach Luo Yi-Gang(羅毅剛) ” the championship experience of Olympics Chen Yu-Fei (陳雨菲) ” and table tennis coach Zhong Jin-Yong( 鐘金勇) “the successful experience of China’s table tennis team”. Among them, Su Bian-Tian (蘇炳添) is the first Asian athletes of 100 meters event who runs into the record of 10 seconds , Chen Yu-Fei (陳雨菲) who is the strong opponent of the world top female player Dai Zhi-Ying(戴資穎) , who beat Dai to win the gold medal in the Tokyo Olympics.

The online exchange seminar of outstanding coaches from cross-strait not only inspires all participants but also makes cross-strait sports substantive exchanges not be interrupted due to the impact of the epidemic. It indeed provides coaches of all levels with training skills to improve the athlete’s performance in the competition and brings the cross-strait sports exchanges in this year to a successful end. 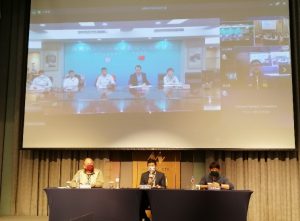